World of Crepes Goes to Orlando!

A Behind-the-Scenes Peek at
The 2009 Citrus Dessert Challenge 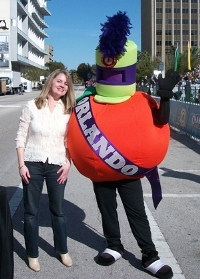 It all began with a phone call. "So," said Stephanie Hanisak, the friendly Citrus Parade coordinator who contacted me to share the news. "We'd really like for you to come to Orlando and present your recipe to our judges. Are you going to be in town on December 30?"

"Well..." I paused, wanting to sound ultra-cool. Like I had a thousand things cooking between then and New Year's. Truthfully, however, beyond testing our Hoppin John Crepes, I didn’t have any exciting plans. And surely, or hopefully, Dad didn't either. But was the contest worth the drive from North Carolina to Florida? After all, I had entered our first recipe competition simply out of curiosity, never expecting to be named a finalist.


"If you win," Stephanie continued, "your recipe will be declared the Official Dessert of the Citrus Parade. "And . . ." she added sweetly, "you'll get to ride in the parade!"

That's all I needed to hear. Ride in the world-famous Citrus Parade? Are you kidding? Now that would be an experience to remember. But there was just one teeny little problem. You see, our dessert wasn't like a pie or a cheesecake. And here's the beauty of crepes. They need to be lovingly assembled on individual plates. Most important of all, the sauce simply had to be heated.

"Will we have access to a hot plate?" I asked, steeling myself. I was asking a lot and I knew it. A tiny part of me was even hoping she might say no, sorry.

Click here to find out if she called my bluff....

I love to Pin - Check out my Pinterest Boards

Have your say about what you just read! Leave me a comment in the box below.

Want to make crepes like a pro? Order your copy of Crepes Cookbookwith step-by-step instructions, (including pictures) on how to make the world's best crepes.Tell me more!
Copyright © 2006 - World-of-Crepes.com. All Rights Reserved.