The History and Other Fun Facts

Are you hungry for facts about oranges?

Oranges are not only the world's most popular fruit, they're also the star ingredient in our crepes suzette recipe.


Read along and learn where oranges come from and the types of oranges available.

Also, find out how to buy and store them and why they're so good for you! 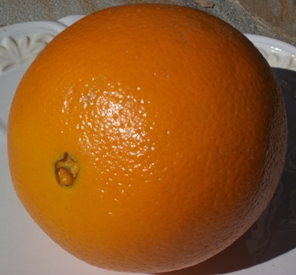 Oranges first originated in either India or China, where they earned the name of "Chinese apples." They first appeared in writing in ancient texts dating back as far as 2200 B.C.

In 1493, on his second voyage, Christopher Columbus brought the first orange to America. Later, Ponce de Leon is believed to have been responsible for planting the first orange trees in North America, near St. Augustine, Florida.

While oranges were first cultivated commercially around the nineteenth century, orange trees have existed for centuries. They are now produced in countries throughout the world including the U.S., Japan, Brazil, Israel and Australia.

Oranges have been revered for centuries and symbolize love and happiness. For the Japanese, orange blossoms stood for chastity and in the Middle East, they represented fertility. 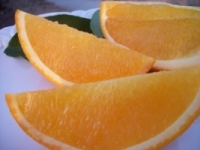 There are three main types of oranges: sweet, mandarin and bitter.

They have been produced commercially in Florida since the mid-1800s. Although not native to Florida, the state's sandy soil and subtropical climate turned out to be the ideal nursery for this fruit, which when combined with Florida's other citrus products, is a $9 billion industry.

Florida produces more than 70 percent of the United States' citrus fruits. It is second only to Brazil in the production of the world's orange juice supply.

While California produces just 24 percent of the nation’s oranges, it produces 80 percent of those sold in grocery stores or other markets. Other leading citrus states are Texas and Arizona. 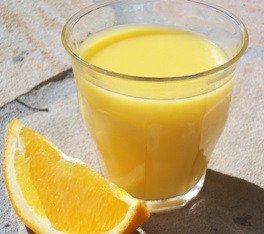 Loaded with Vitamin C, low in sodium and fat, they are a dieter's dream.

One 8-oz glass of juice or 1 medium orange contain nearly 100% of the recommended daily allowance of Vitamin C.

This fruit also contains other healthy substances such as Vitamin B, carotene, potassium, and folic acid.

Eating them and drinking their juice regularly helps boost your immune system, lower your cholesterol and may guard against cancer and heart disease.

How to Buy and Store Your Oranges 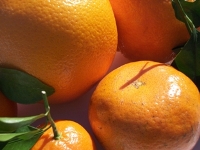 When choosing your orange, select one that is heavy for its size because this usually means it will be juicy.

Smaller fruits tend to be sweeter than larger ones.

Don't rule out oranges with color variations. A perfectly uniform color might be an indication of dyes or additives. Organic produce is rarely "perfect looking" but tastes a whole lot better than the commercial stuff that looks perfect from the outside.

When in doubt, hold it up to your nose and sniff. Fragrant oranges are likely to be the tastiest.

They will stay fresh for about two weeks on your countertop and will last for up to a month in your refrigerator. If you buy in bulk, you can store them for 3-4 weeks in a cool and dark room.

By the way I found a great source for organic fruits and veggies. It's Organic Mountain Farms. You can buy and have them ship organic produce directly to your doorstep. The produce tastes heavenly and is pesticide-free!

Or if you feel more comfortable, you can buy their products at Amazon.com 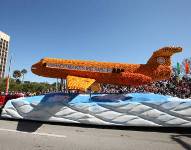 The orange is one of several fruits celebrated every year at the annual Citrus Parade in Florida.

More than 100,000 pieces of fresh fruit are used in this parade which features floats like the jet airliner to the left, which was assembled using fresh oranges.

As a Valencia orange ripens on the tree, it turns orange. However, as the temperature increases, the skin may reabsorb chlorophyll, accounting for a greener hue.

As nights get cooler in its growing season, the skin of the blood orange intensifies in color.

Frozen juice concentrate was introduced in 1940 as part of the National School Lunch Act.

Fresh juice, zest and liqueur are the key ingredients of what may be the world's most famous dessert, crepes suzette. This dish was reputedly created in 1895 by French chef Henri Charpentier in Monte Carlo.

Sources for more Facts About Oranges:

Return from Facts About Oranges to Crepes Suzette.

I love to Pin - Check out my Pinterest Boards

Have your say about what you just read! Leave me a comment in the box below.

Want to make crepes like a pro? Order your copy of Crepes Cookbookwith step-by-step instructions, (including pictures) on how to make the world's best crepes.Tell me more!
Copyright © 2006 - World-of-Crepes.com. All Rights Reserved.